We are pleased to announce that International Flutist and National Marketing & Sales Director for Miyazawa Shivhan Dohse will be coming to Colorado in May to present two special workshops "Introduction to the Irish Flute" and "How to find your Perfect Flute Workshop" at Ellen Ramsey Flutes in Longmont, Colorado. She will also appear at several local high school's bringing her wealth of talent and knowledge to the Front Range!  We are excited to announce that her classes are FREE, made possible by generous sponsorship of Trevor James Flutes, Ellen Ramsey Flutes, and Integral Steps' many supporters!
Register Below for Shivhan's classes!
~ All Classes are FREE! ~
~ FREE flute repairs the day of the workshop! ~
***We are offering a FREE flute themed gift-bag to our first 15 registrants!*** 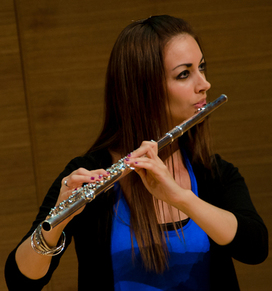 A versatile musician, Shivhan Dohse is in demand as a chamber musician, orchestral musician, soloist and teacher. She has been a featured Solo Artist at the International Flute Festival in Brazil (2015 & 2012), the San Francisco Flute Festival (2012), the National Flute Association Convention (2015, 2014 & 2013) as well as the University of California - Santa Barbara Flute Summit (2014). Internationally, Ms. Dohse has performed concerts in Italy, England, France, Spain, Ireland, Russia, Brazil, Germany, Austria and Switzerland.

Ms. Dohse has been Principal Flute of the Ottumwa Symphony Orchestra since 2010 and performs regularly with Orchestra Iowa and the Waterloo-Cedar Falls Symphony as first call substitute, often times subbing Principal positions. In 2014, Shivhan performed the Chaminade 'Concertino' and the Hanson 'Serenade' with the Ottumwa Symphony Orchestra. She looks forward to performing as the Guest Soloist with the Coe College Band this fall in addition to their tour to Costa Rica in 2016.

Shivhan is currently Adjunct Instructor of Flute at Cornell College and Coe College, and has also served on the faculty of Culver-Stockton College and Clarke University. She has maintained a private studio since 2001 and has also been the National Marketing & Sales Director for Miyazawa Flutes (USA) since 2007. With her interest in entrepreneurship and music business, she has given workshops on the previously mentioned topics at the Peabody Conservatory of Music, the University of California - Santa Barbara, the women's music fraternity, Sigma Alpha Iota's, 'Province Day' as their Guest Speaker and looks forward to presenting a similar workshop at Oklahoma State University later this fall. Shivhan has been a judge for multiple competitions including the San Francisco Young Artist Competition, the Florida Flute Festival Junior Artist Competition, the Iowa Flute Festival Flute Wonders Competition (Junior and Senior Division), the Quincy Symphony Young Artist Concerto Competition and the Moline High School Solo & Ensemble Contest.

Shivhan is co-founder of the genre-shattering, pop-fusion flute duo, In Sterio. In Sterio released their first original album, 'Frequency', in 2010 followed by their sophomore album, 'Awake', in 2013. The duo has performed at numerous NFA conventions, the Midwest Convention, Piccolo Spoleto Festival, Florida Music Educator's Convention, Nebraska Music Educator's Convention, Florida Flute Convention, Mid-Atlantic Flute Fair as well as holding residencies at Texas Tech University, University of Wisconsin (Madison, Milwaukee & Whitewater), James Madison University, University of Nebraska (Omaha & Lincoln), Iowa State University, University of Northern Iowa, University of South Florida, University of Tennesee (Knoxville), Lincoln Memorial University, the Raleigh Area Flute Association and the Southeast Michigan Flute Association. In 2014, In Sterio premiered a piece at the 2014 Midwest Conference written by Brian Balmages for two flutes and jazz band. Their sound has been described as "two flutes - one brain". Performances have been praised as "spell binding" and "awe inspiring" and "this high octane, 'outside the box' duo brings audiences to their feet."

Always having a love for multiple genres of music, Shivhan spent a semester during her undergrad studying Irish Music at the University of College Cork in Cork, Ireland as well as a summer in St. Petersburg, Russia studying flute at the Herzan Pedagogical University. During her master's, Shivhan spent two years playing flute with the Irish band, 'Dannsair'. After the release of their CD, 'Rias Medias' in 2007, they performed concert tours in Spain (2008) & Ireland (2009). She has been invited on stage to perform with folk singer/guitarist Martin Sexton and folk/blues band 'Big Blue Sky' in addition to performing in concerts with Harry Connick Jr., Jeff Goldblum and Burt Bacharach. Ms. Dohse will be the Featured Artist for the Corridor Jazz Project in 2016 performing an Ellington piece for flute and jazz band.

Ms. Dohse completed her Bachelor of Music degree at the University of Northern Iowa studying under Dr. Angeleita Floyd, and her Master's of Music Degree from the University of California Santa Barbara as Jill Felber's Teaching Assistant. As part of her assistantship at UCSB, Shivhan taught the undergraduate flute lessons to music minors and education majors, directed the UCSB Flute Choir and co-ordinated a summer flute festival titled, 'Flute Focus.' ​
Thank you to our generous sponsors!